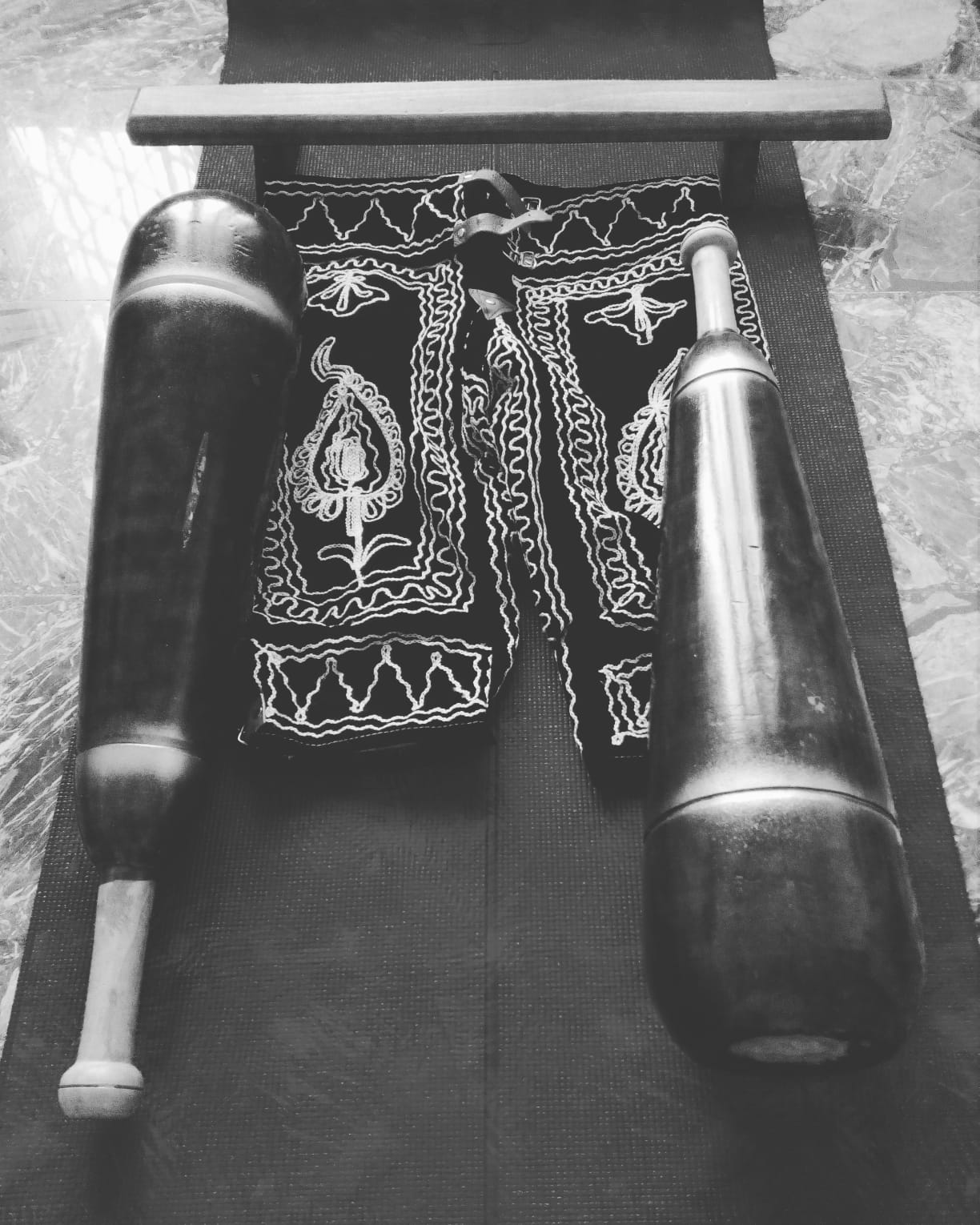 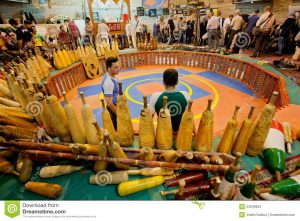 1- Varzesh-e-Bastani (ancient sport): Is a comprehensive physical exercise session of 60 to 90 minutes, consisting of different kinds of physical activities appropriate for the age groups of 16 to 60-70 years old. These exercises were practiced under special customs and rituals established over hundreds of years. Each session of Varzesh-e-Bastani comprises: Warming up, main body of physical exercises, and warming down.

2- Zurkhaneh (home of strength): Is the very specially designed physical Structure, entangling, a myriad of philosophical, religious, cultural and educational Bases, together with the necessary technical facilities and apparatus for the cultivation of the body and the excellence of mind. The entrance door is low so that body of any walk of life at the time of entrance must of necessity bow in respect and enters this sacred place.

3- Bastanikar: Is everybody who practices Varzesh-e-Bastani and possesses a number of outstanding physical and spiritual traits and characteristics.

4- Pahlevan: Is the first champion among other bastanikars of a village, city, Province, country or the world of the time. This title was awarded only to athletes who were recognized as having had reached perfection in the qualities of both physical Prowess and moral virtue. The significance of Pahlevanship has been well resented in the Farsi language literature and culture. As an example, Ferdowsi, in his outstanding poetic book (Shahnameh), pictures Rostam, the Persian legendary Pahlevan, fighting heroically against depravity, vice, and sinful deeds and thoughts in the purest and most literary forms in the tenth century. Pahlevanship exists in daily life of the Zurkhaneh athletes, the most recognized tradition, Golrizan, happens when someone has a financial problem. In such a case after the Morshed bell the ring (Zang) anybody who wants to help, put the money in the special pot during this traditional charity ceremony.
In each Varzesh-e-Bastani session, the Morshed accompanies all the exercises with chanting the epics and poems that describe the braveries and heavenly prowess and heroism of these Pahlevans for the good of the human beings.

5- Gowd: Is the most significant facility where all the activities of the Varzesh-e-Bastani are performed. The floor of the pit is constructed with different layers of, from bottom to top, crushed tumble weeds, a thinner cushion of dried fine straw, a thicker layer of coal ash and finally, a well packed layer of clay or argil in a way to assure softness and flexibility needed for the safety of the Bastanikars during their physical activities. The Khadem (janitor) of the Zurkhaneh makes regularly sure that this floor is sufficiently well packed and humid before the start of every session. To eliminate the detrimental effects of dust and humidity, especially in an indoor and relatively small space such as the Zurkhaneh, the methods of construction of Gowd’s floor are rapidly approaching the ones used in constructing the other sport activities areas like the contemporary running or playing fields.

6- Morshed: Is an experienced Bastanikars who, at the same time, is a well-educated man who also has some talents in music. He is especially competent in providing the different rhythms that are needed for directing the various exercises of a Varzesh-e-Bastani practice session. He does this job by chanting the epic poems and couplets and by playing the Zarb and Zang that he has at hand. Some times there are two Morsheds who in harmony with each other direct the practice session.

7- Zarb: Is a large hemispheric wooden drum, with a skin of deer, stretched over the larger end of it. Zarb is used to give the Indispensable rhythm and cadence for all the exercises through-out the session.

8- Zang: Zang is a bell that hangs within reach of Morshed’s hand. Morshed will play the Zang for purposes such as signal the beginning or the end of an exercise, attract the attention for making an announcement, honor the presence of a Pahlevan, guest, or a social personality and communicate with the Miandar and the other athletes who are performing in the Gowd.

9- Miandar: Miandar performs at the central part of the Gowd. He is the key person and leader of session.
10- Pishkesvat: Is a Bastanikar, who is characterized by a high degree of expertise, experience and seniority. He also assumes the responsibility of teaching the techniques of Varzesh-e-Bastani to younger Bastanikars.

12- Nocheh or Nokhasteh: Is a beginner (novice) in Varzesh-e-Bastani. He is ordinarily under the direction and the apprenticeship of a Pishkesvat. This is the lowest rank in the hierarchy of Varzesh-e-Bastani. The highest rank in Zurkhaneh is Saheb-e Taj (owner of the crown). It is noticeable that the one who is the first to start each one of the individual exercises is the Nocheh who is at the bottom line in seniority. The last athlete who will finish the exercise bout in the individual events is the Miandar.

13- Sar-Dam: Sar means “place” and Dam refers to “speaking or chanting”. From the technical standpoint, this is the Morshed’s rostrum from where he leads the practice session by his chants, Zarb and Zang.

14- Takhteh-Shena: Is a plank that is used for the different types of push up exercises particular to this traditional sport.

15- Meel: Is a big chunk of hard and heavy wood related with the idea of using it somewhat like Indian clubs, however, it differs with them in a number of ways. First, its base is the largest part of it. Second, it is considerably longer, larger and heavier. Third, Meel are used primarily for weight training. Fourth, one pair of Meel is necessary for exercise in Varzesh-e-Bastani. Fifth, the handle of the Meel is a cylindrical piece of hard wood that is fixed very firmly on the top of the Meel.

16- Kabbadeh: Is a bow shaped iron instrument used for weight training in Varzeshe-Bastani. On this instrument in Zurkhaneh, the string has been replaced by a heavy chain which generally is made of 16 links. In each link there are approximately six metallic discs, each one measuring about the size of a small saucer. Kabbadehs weigh mostly between 11 to 50kg. This weight can be adjusted to athlete’s ability by removing or adding chain links or discs.
17- Sang: Is a huge rectangular piece of hard wood that has some similarities with the ancient shields used to ward off blows or missiles. The side of the rectangular that is moved near the floor throughout the exercise is gently arched. There is a hole at the central part of each Sang with a bar across it that is used as a hand grip around this opening is covered by a soft material to protect the hand. Sangs are used for weight training and one pair of them is necessary for the exercise.

18- Shelang-Takhteh: Is a plank of hard wood. This equipment is used for stretching exercises, muscular endurance and agility of the legs, aimed at running speed and endurance. This is a heavy exercise and 40 to 50 repetitions are considered to be a high performance in this event.

19- Shalvar-e-Bastani: Is a knee-breeches pantaloon that is typical clothing for the Bastanikars. This clothing is made of either leader or of heavy embroidered cloth decorated with elaborate designs and scenes. The firmness and resistance of this kind of trousers make it possible for the athletes to use it as a dependable grip during traditional wrestling of Varzesh-e-Bastani.

20- Kamarband: Is a large and heavy leader belt made especially for Shalvar-e-Bastani. This belt provides a more dependable grip for wrestling specific to Varzesh-e-Bastani.

21- Koshti (Wrestling): The type of Koshti that is performed in Zurkhaneh looks much like the Greek style wrestling where only the upper body of the wrestler gets involved in the technical pinning and holds of the combat.